When I took the first steps on my freelance copywriting journey back in March (first steps as a freelancer that is; as an agency copywriter, I’d already circumnavigated the marketing globe) I had a few modest goals in mind.

Naturally, I wanted to do great work for wonderful clients, helping them achieve big things through the power of well-picked words. I also quite fancied seeing inside a bunch of agencies and businesses having previously been at the same desk for <mumble mumble> years. And, ultimately, I hoped to earn enough cash to ensure that beans-on-toast remained a snack rather than a staple, and to afford the odd bottle of very strong, eccentrically-hopped craft ale.

Modesty and/or shame forbid me from detailing the ways in which I may or may not have hit these targets, so instead, let me round off 2015 by talking about one project I would never have dared hope might come my way.

Sheffield’s Human Studio is one of the creative outfits I’ve followed from afar for years. Another would be the unfeasibly influential Designers Republic – the same studio where Human founder Nick Bax worked for 17 years. Another favourite of mine is Build, founded by Mike and Nicky Place after Mike left, erm, the Designers Republic. There’s a theme, certainly. 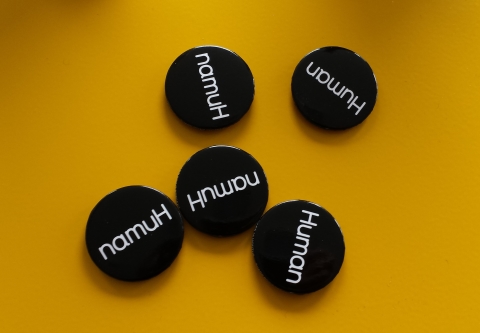 I say I’ve followed Human from afar, but in fact it has sometimes been from quite close. When I created a sci-fi backstory for the Sheffield electronic music label Central Processing Unit, it was Human who were creating the label’s super-minimal branding. I’d met Nick Bax too, once upon a lifetime ago, when I was creative writer at the games developer Psygnosis, and the Designers Republic were working with us on the game Wipeout.

But although we were known to each other, Nick Bax’s email in June this year still came as a surprise. He wanted to know if I was interested in working with Human on a project – an exhibition catalogue springing from their work with a gallery in Tokyo.

Guess which side of me won.

The job was briefed one memorable afternoon in July when I travelled to Human HQ in Sheffield’s Park Hill flats. (I could take this story down another diversion at this point, as those flats have exercised my thoughts on many occasions over the years, not least in this recent interview with the painter Mandy Payne.) Nick explained that they were planning to create a collection of 3D objects for the exhibition – sculptures I suppose – but that instead of transporting them to Tokyo by air or sea, the objects would be sent as digital files to be 3D printed at an event in the Calm & Punk gallery. 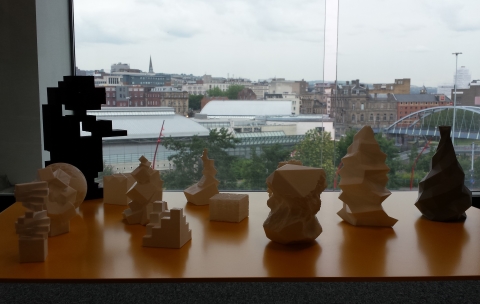 So what was required for the introduction to the Human catalogue? Nick was pleasingly, yet also worryingly, vague. I inferred that he didn’t want a conventional studio biography or ‘explanation’ of what the work was about, and that was a good thing. On the other hand I felt the tantalising creative terror that comes when you know something is expected of you, but you’re not entirely sure that you’ll be able to work out what it is.

However, all the best projects begin that way, and my thoughts were duly set in motion.

I won’t detail the night sweats, mood swings and general creative thrashing around that accompanied my efforts to come up with an executable idea. Suffice to say, I delivered the goods on time and, six or so weeks later, I had colonised the first six pages of the exhibition catalogue, in English with side-by-side Japanese translation.

My piece was a short story about matter transference – or rather, about the way that the transfer of physical objects between Sheffield and Tokyo might evolve over the years. It took the form of three conversations: the first was concerned with events 40 years ago when a friend’s dad brought a calculator back from Japan; the second detailed Human’s use of 3D printing in the present day; the third speculated about where this technology may lead – in this fictional case, to the transference of humans at the press of a button. 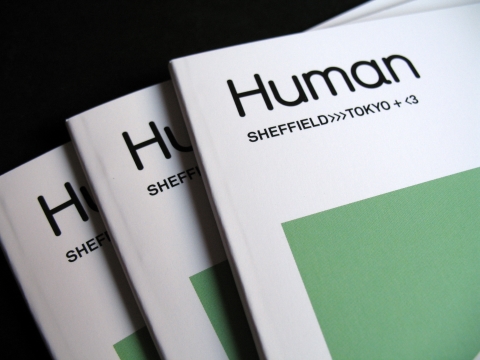 The exhibition, called SHEFFIELD>>>TOKYO+<3, took place in October 2015: the files were delivered, the objects were printed, the gallery put them on display. The catalogue is slim and seductive; it is beautifully designed, of course, and adds context without over-explanation. If the objects and their mode of delivery raise questions, the catalogue doesn’t answer them; rather, it raises a few questions of its own.

For me, working with Human Studio and creating this piece remains one of 2015’s biggest thrills. Had I allowed myself to believe that work like this might come my way, it’s exactly the kind of job I’d have dreamt up. It’s my hope that this kind of storytelling – not a world away from the kind of work I was doing 20 years ago with Psygnosis – feeds back into every project I’m involved with, as even the most functional copy can come alive when you add a little storytelling magic.

As I said, that’s my hope. It’s for my clients to decide whether it’s what I achieve. But it’s what I’ll continue striving for as my professional odyssey continues in 2016, and my tentative freelance steps become giant creative strides. 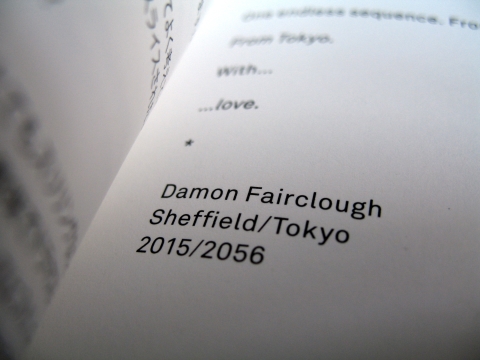 You can read more of my words about Sheffield’s Designers Republic here.